Chronic obstructive pulmonary disease (COPD) is a type of obstructive lung disease characterized by long-term breathing problems and poor airflow. Chronic bronchitis and emphysema are older terms used for different types of COPD. The term "chronic bronchitis" is still used to define a productive cough that is present for at least three months each year for two years.

Chronic obstructive pulmonary disease (COPD) is a common lung disease. Having COPD makes it hard to breathe. There are two main forms of COPD:

Most people with COPD have a combination of both conditions. 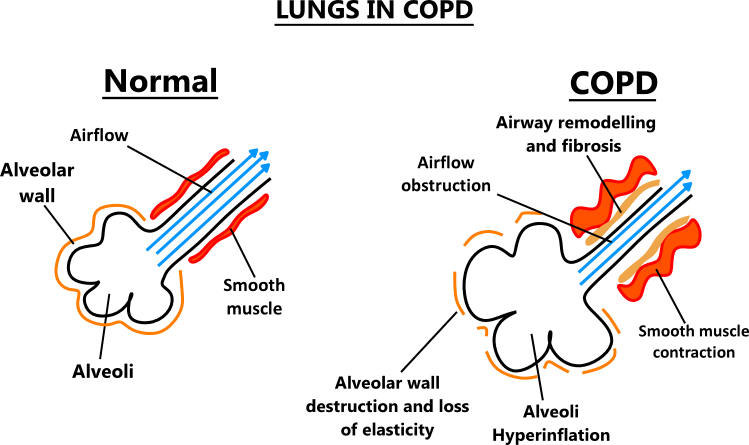 At first, symptoms of COPD can be quite mild. You might be inclined to dismiss them as a cold. Early symptoms include:

You might start making subtle changes, such as avoiding stairs and skipping physical activities. Symptoms can get progressively worse and harder to ignore. As the lungs become more damaged, you may experience:

In later stages of COPD, symptoms may also include:

Immediate medical care is needed if:

Symptoms are likely to be much worse if you currently smoke or are regularly exposed to smoke.

The primary cause of COPD is tobacco smoke, with occupational exposure and pollution from indoor fires being significant causes in some countries. Typically, these exposures must occur over several decades before symptoms develop. A person's genetic makeup also affects the risk. 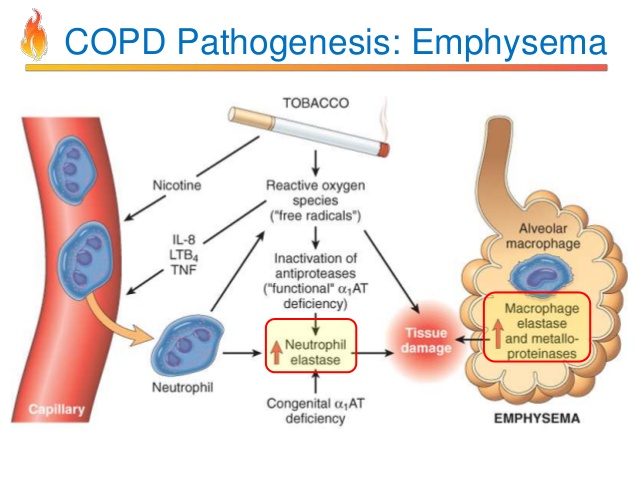 The primary risk factor for COPD globally is tobacco smoking. Of those who smoke, about 20% will get COPD, and of those who are lifelong smokers, about half will get COPD. In the United States and the United Kingdom, of those with COPD, 80–95% are either current smokers or previously smoked. The likelihood of developing COPD increases with total smoke exposure. Additionally, women are more susceptible to the harmful effects of smoke than men. In nonsmokers, secondhand smoke is the cause of about 20% of cases. Other types of smoke, such as marijuana, cigar, and water-pipe smoke, also confer a risk. Water-pipe smoke appears to be as harmful as smoking cigarettes. Problems from marijuana smoke may only be with heavy use. Women who smoke during pregnancy may increase the risk of COPD in their child. For the same amount of cigarette smoking, women have a higher risk of COPD than men.

Poorly ventilated cooking fires, often fueled by coal or biomass fuels such as wood and dung, lead to indoor air pollution and are one of the most common causes of COPD in developing countries. These fires are a method of cooking and heating for nearly 3 billion people, with their health effects being greater among women due to more exposure. They are used as the main source of energy in 80% of homes in India, China and sub-Saharan Africa. People who live in large cities have a higher rate of COPD compared to people who live in rural areas. While urban air pollution is a contributing factor in exacerbations, its overall role as a cause of COPD is unclear. Areas with poor outdoor air quality, including that from the exhaust gas, generally have higher rates of COPD. The overall effect in relation to smoking, however, is believed to be small.

Intense and prolonged exposure to workplace dust, chemicals, and fumes increase the risk of COPD in both smokers and nonsmokers. Workplace exposures are believed to be the cause in 10–20% of cases. In the United States, they are believed to be related to more than 30% of cases among those who have never smoked and probably represent a greater risk in countries without sufficient regulations. A number of industries and sources have been implicated, including high levels of dust in coal mining, gold mining, and the cotton textile industry, occupations involving cadmium and isocyanates, and fumes from welding. Working in agriculture is also a risk. In some professions, the risks have been estimated as equivalent to that of one-half to two packs of cigarettes a day. Silica dust and fibreglass dust exposure can also lead to COPD, with the risk unrelated to that for silicosis. The negative effects of dust exposure and cigarette smoke exposure appear to be additive or possibly more than additive.

Genetics play a role in the development of COPD. It is more common among relatives of those with COPD who smoke than unrelated smokers. Currently, the only clearly inherited risk factor is alpha 1-antitrypsin deficiency (AAT). This risk is particularly high if someone deficient in alpha 1-antitrypsin also smokes.[46] It is responsible for about 1–5% of cases and the condition is present in about three to four in 10,000 people. Other genetic factors are being investigated, of which many are likely.

A number of other factors are less closely linked to COPD. The risk is greater in those who are poor, although if this is due to poverty itself or other risk factors associated with poverty, such as air pollution and malnutrition, is not clear. Tentative evidence indicates those with asthma and airway hyperreactivity are at increased risk of COPD. Birth factors such as low birth weight may also play a role, as do a number of infectious diseases, including HIV/AIDS and tuberculosis. Respiratory infections such as pneumonia do not appear to increase the risk of COPD, at least in adults.

An acute exacerbation (a sudden worsening of symptoms) is commonly triggered by infection or environmental pollutants, or sometimes by other factors such as improper use of medications. Infections appear to be the cause of 50 to 75% of cases, with bacteria in 30%, viruses in 23%, and both in 25%. Environmental pollutants include both poor indoor and outdoor air quality. Exposure to personal smoke and secondhand smoke increases the risk. Cold temperature may also play a role, with exacerbations occurring more commonly in winter. Those with the more severe underlying disease have more frequent exacerbations: in mild disease 1.8 per year, moderate 2 to 3 per year, and severe 3.4 per year. Those with many exacerbations have a faster rate of deterioration of their lung function. Pulmonary emboli (blood clots in the lungs) can worsen symptoms in those with pre-existing COPD. Signs of PE in COPD include pleuritic chest pain and heart failure without signs of infection.

As per Ayurveda for the prevention or management of any disease, there are three broad steps described as

The practice of Pranayama i.e Kapalbhati purifies the Nadi. Depending upon the type of Pranayama performed, the flow of pranic energy may be increased or decreased in either one or more of the major Nadi: Ida, Pingala, or Sushumna Nadi. While Ayurveda understands the role of Pranayama in regards to Prana, Tejas, and Ojas and their corresponding effects on the mind, relaxation along with conscious breathing of almost any type improves the functioning of the respiratory system .Simple diaphragmatic breathing increases the volume of air moving through the lungs on inhalation and exhalation. It reported that the practice of Pranayama and meditation enable patients to take some control over autonomic function, offering the patient an opportunity to relax and dilate the bronchial passages at the onset of an asthmatic episode. This may also benefit patients with additional breathing challenges such as chronic bronchitis.

Above given is useful Asana for PranavahaSrotas as it accelerates the blood circulation of the lungs and thus increases the vital capacity of the lung.

Respiratory Disorders
Back To Top